Memory analysis is an essential method of electronic evidence discovery. It allows computer forensics to decrypt hard disks and files and extract encryption keys and passwords.

Fine-tuning password recovery attacks is a complicated process. The new version features an improved attack editor that shows examples of generated passwords and makes it easy to experiment with attack settings.

We have also improved the performance of PDF password recovery, which is now 7 times faster on Decryptum. The new version supports instant decryption of FileVault/APFS volumes using a keychain file, introduces support for Tally.ERP 9, and more. 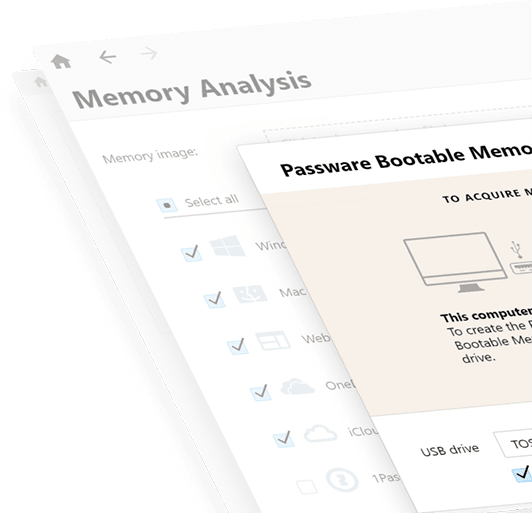 Passware introduces a new tool that runs from a bootable USB drive and acquires memory images of Windows, Linux, and Mac computers.

The tool is available in Passware Kit Forensic and Business editions.

Instant FileVault/APFS decryption with a keychain

Passware Kit 2021 v1 instantly decrypts FileVault/APFS volumes and unlocks APFS on Macs with the Apple T2 Chip if a Keychain file from the corresponding iOS device image is available after decryption by third-party tools.

The new Passware Kit recovers passwords for company files created with Tally.ERP 9 software – Company.900. The recovery speed is up to 10 million passwords per second.

In addition to PDF file open passwords, Passware Kit now recovers owner passwords and accelerates the recovery on both NVIDIA and AMD GPUs.

GPU acceleration of password recovery for PDF files is even greater now!

Import of dictionaries preserving the order of passwords

There is now a new option that allows users to keep the original order of passwords in a dictionary when importing it into the Passware Kit.

This allows the use of password lists sorted by the frequency of use of those passwords. It is helpful when recovering passwords for file types with secure encryption, such as iTunes backups or hard disk images.